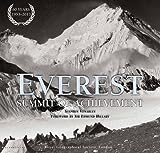 To mark the 60th anniversary of the first ascent of Everest, the Royal Geographical Society has brought out a new edition of its “official” biography of the mountain, written by British mountaineer Stephen Venables. The first edition of the book was published on the 50th anniversary of the ascent The RGS says it is “the first book on the subject to benefit from complete access to our Collections”.